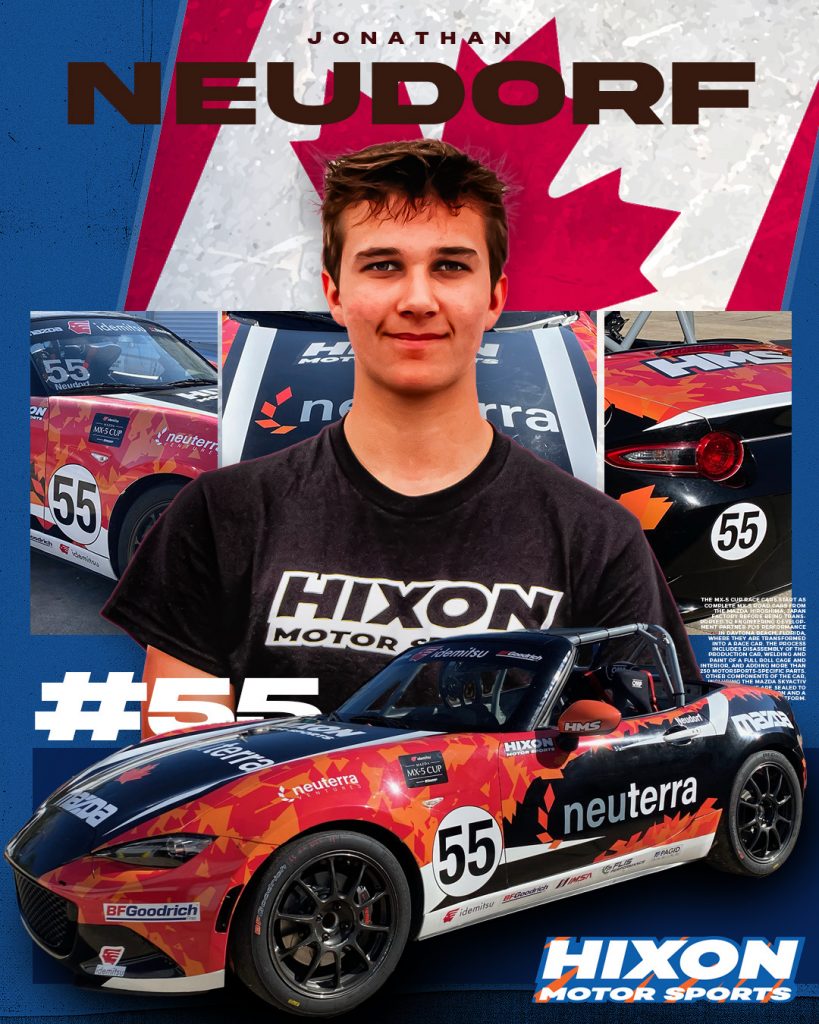 Continuing to build their 2023 Idemitsu Mazda MX-5 Cup presented by BFGoodrich Tires (MX-5 Cup) program, Hixon Motor Sports (HMS) is excited to announce Jonathan Neudorf as the sixth driver for their 2023 roster behind the wheel of the #55 race car. Earning multiple awards in 2022 despite coming up just ten points short in the overall series driver championship, HMS is poised to take 2023 by storm as they look to extend on their Team Championship and Rookie of the Year honors in 2022.

“I am beyond excited to be joining HMS for the 2023 MX-5 Cup season,” explained Jonathan Neudorf. “For me, to have never competed in a road race not even a year ago to now joining such a competitive pro series is mind-blowing for me, and I couldn’t thank HMS, Neuterra, GP Brewing, and my parents enough for this opportunity.”

“Working with Jonathan this season has been fun watching him progress and learn at each event all the way to winning in the final race of the year. He will be a constant competitor every weekend in MX-5 Cup,” stated Chris Haldeman, Xfactor team owner.

“We look forward to having Jonathan as part of our program, and we are excited about his potential growth and enthusiasm towards not only our program but the MX-5 Cup Series as well,” expressed Bryan Hixon. “Jonathan started his racing career a little later than most just as I did at age 23, but I am confident in the tools that we have and the exceptional people we can surround him with, his upward trajectory will continue.”

It has been a steep learning curve for Neudorf this last year, but with all the help from everybody in his corner, he has learned and excelled quickly. Starting off racing at such a late age can be a huge disadvantage; however, Neudorf’s racecraft in MX-5 Cup will kick off without any bad driving habits. Great results won’t come easy in such a competitive field, but that just means he must work harder and do whatever he can to improve both on and off the track. The coaches, crew, teammates, and powerful social media campaigns will have Neudorf’s back on and off the track.

After graduating from the karting ranks where he competed in LO206 and in the TaG 125cc classes, Jonathan moved into the Spec Miata program and competed at the SCCA Hoosier Super Tour as well as the SCCA Texas Majors / Regionals. 2023 will see him level up one more time to the big leagues, Mazda Motorsports, and compete in the MX-5 Cup.

Neudorf continued, “I believe that my experience racing with Xfactor in a Spec Miata for the SCCA super tour and regional races this past year has gotten me prepared for the level of close racing the MX-5 Cup holds. Having had some very good results from my last few races in the 2021 Spec Miata season and getting my first wins has given me the confidence and the skills necessary to compete at the pro level under IMSA.”