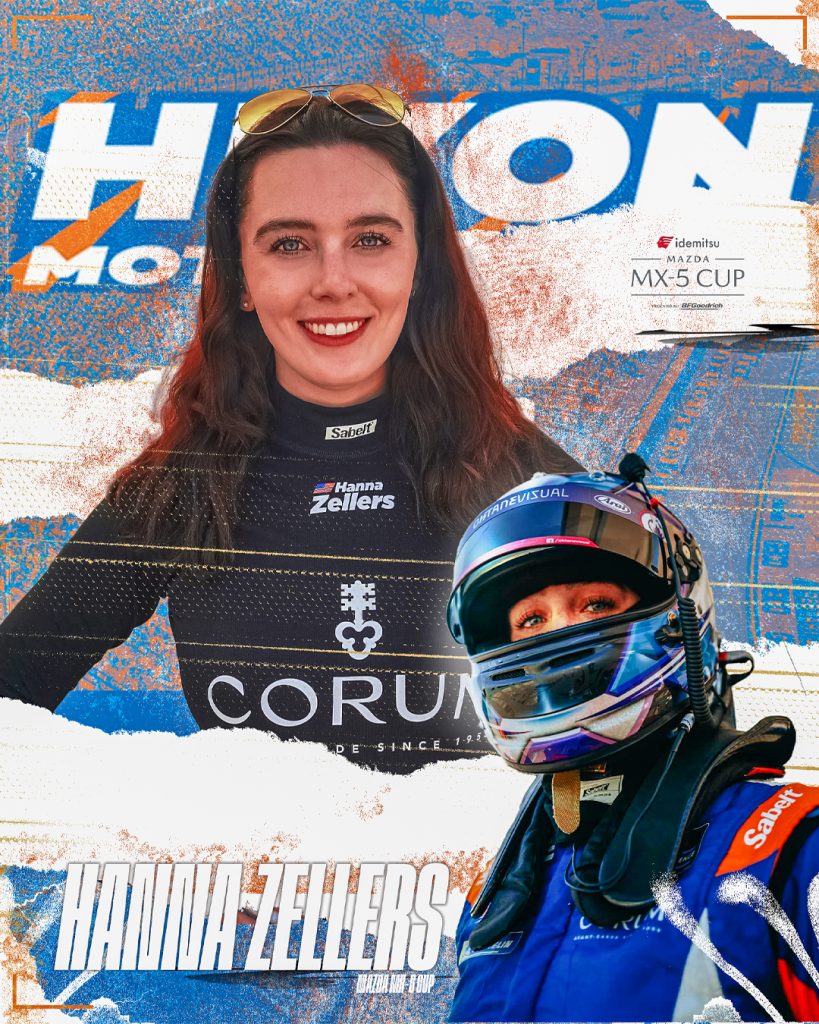 Competing in a variety of different race programs over the past few seasons including the IMSA Prototype Challenge, female racer Hanna Zellers is set to join Hixon Motor Sports (HMS) in 2023. Ready to tackle the Idemitsu Mazda MX-5 Cup presented by BFGoodrich Tires (MX-5 Cup), Zellers is the first signee of the HMS program for 2023 and the first female confirmed for the upcoming season.

“I am excited to be joining the reigning Team Champions, Hixon Motor Sports for the full 2023 MX-5 Cup season,” expressed Zellers. “I have been competing in different series for the past few years, lastly IMSA Prototype Challenge, and I have been working really hard to keep competing within IMSA. To be racing under the IMSA banner in a single-make, single-driver series is nothing short of a dream come true. I have raced at several of the circuits that the MX-5 Cup will compete at in 2023 and feel more ready than ever, and I cannot wait to kick off the season with the first two rounds at Daytona!”

“Our first signee for 2023, our first female driver, plus our first contender for the 2023 MX-5 Cup Rookie of the Year is now locked and loaded for a new season of competition,” added Team Owner, Bryan Hixon. “Hanna joins our program with experience and knowledge and is driven to excel and win. She is aggressive on the track and that is needed in the close quarter MX-5 Cup.”

Team Manager, Shea Holbrook, added, “I am really excited to buckle in Hanna Zellers this season, and the team is also thrilled that Hanna has also teamed up with Lyn St. James’ charity, Women in Motorsports North America (#WIMNA).

“Shift Up Now is thrilled to see another fast female athlete have an opportunity in top equipment with Hixon Motor Sports in MX-5 Cup,” added Pippa Mann. “After watching several other Shift Up Now Athletes race with HMS in 2021, we’re excited to see their support of talented women continue with Hanna Zellers, and we’re looking forward to cheering her on as she strives towards her goal of Rookie of the Year,” Pippa Mann, CEO of Shift Up Now.”

Lyn St. James mentioned, “I love how Mazda continues to lead the way for supporting and advancing opportunities for women in motorsports.”

Zellers continued, “HMS is the team to beat in 2023, and I look forward to assisting them in continuing their impressive results from 2022.”

Hixon added, “We have a big year to follow up on, and I think Hanna will be able to slot into our program and have immediate success. We hope another female enters the full season so that Hanna can go after the new prize money for women race-by-race where at least two women must be in the race to chase after the fastest female on the official results to win a new prize in 2023 thanks to Mazda.”