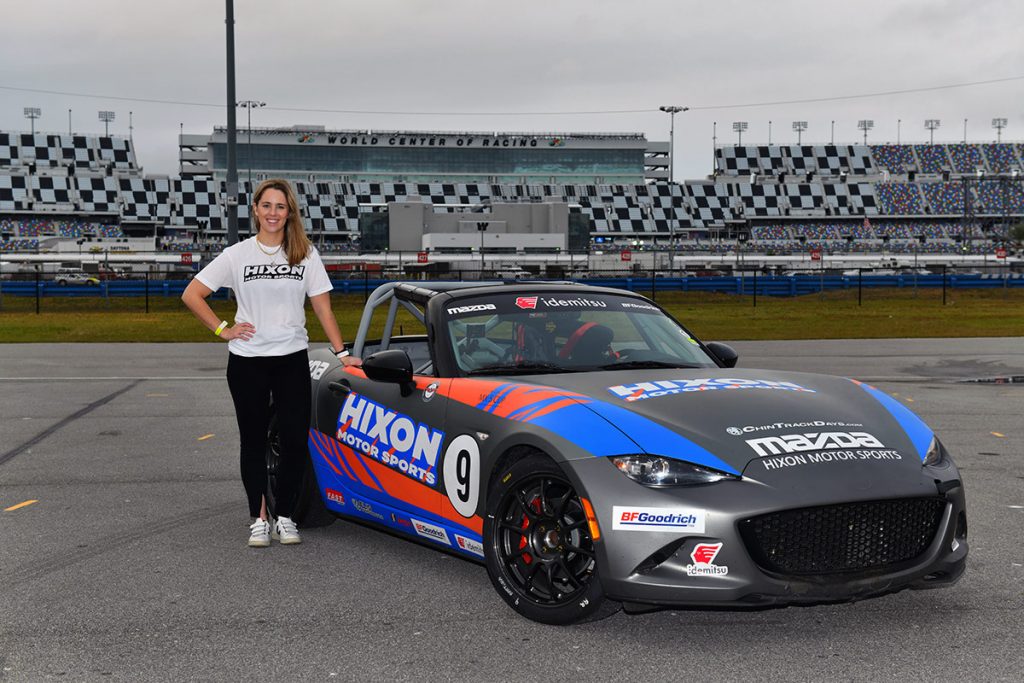 Last competing in the Mazda MX-5 Cup Presented by BF Goodrich back in 2019, Loni Unser will return in 2021 with Hixon Motor Sports (HMS). Bringing the famous Unser name to both the Mazda and IMSA paddocks, Loni has inked a deal to compete in the opening two events of 2021 as she works towards a full season of competition in MX-5 Cup with the goal of winning the Rookie of the Year honors.

“I am really looking forward to competing at such a legendary facility such as Daytona,” added the 23-year-old female competition. “To be able to compete with HMS during the Rolex 24 Hours is an opportunity that I will cherish. To follow up that event and race alongside the NTT IndyCar Series at the Grand Prix of St. Petersburg is really a dream for many and I look to put my best foot forward.”

Getting a late start to the motorsport’s world, Loni was able to compete in her first official event in Spec Miata only four years ago after completing a BMW Driving School. Later this month, she will race at one of the most legendary tracks in the world with support from Swamp Dragon.

“Swamp Dragon is a new kind of product, and like Loni, we might have something to prove,” added Matt Beeson. “We are honored to associate with the Unser name, and I am really excited. It’s my first time sponsoring a race car! I know race fans are likely to like spicy foods, so really excited to expose them to the world’s only liquor hot sauce! It’s a perfect outlet for us, and the perfect match. Be sure to look us up at www.SwampDragonHotSauce.com.”

“Growing up in Idaho, a racetrack was something that was few and far between,” added Loni, daughter of Jonny Unser. “My Dad signed me up for a driving school and I did well, much better than some of the other students and it was from that point that I knew I wanted to make motorsports my life. I remember sitting with my family asking if there was any way that we can do this full-time and thankfully, they have supported me along the way.”

Graduating with a degree in Environmental Design from the University of Colorado – Boulder, Unser is returning to the series after competing in select events in the ND1 ranks in 2019. Claiming top ten results in only her third year of competition, Unser is hoping that two more years of maturity and laps helps her move up the results sheet.

Unser added, “I am really excited to carry on the Unser name in motorsports. My goal is to race and drive at peak performance and before qualifying, set a realistic goal to achieve. Obviously, as a racer, I want to win, but if I can finish in the top ten, I think that would be a huge accomplishment. A big shout out and thank you to Bryan Hixon and HMS for the support and encouragement to chase my racing dreams and with Swamp Dragon, an alcohol based hot sauce from Louisiana that has come on board to support my Daytona event weekend.”

With on-track action at the Daytona International Speedway beginning Wednesday January 27th, two wheel-to-wheel races will go green on the 28th and 29th as the 2021 season takes the green flag.