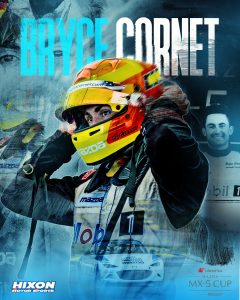 Making the transition from open wheel to sports cars at the end of the 2019 season to better suit his trajectory in motorsports, Bryce Cornet has now committed to Hixon Motor Sports (HMS) for the 2022 Idemitsu Mazda MX-5 Cup presented by BFGoodrich Tires (MX-5 Cup). As a Mazda Motorsports Shootout Scholarship Recipient, Cornet will pilot the #65 HMS, Mazda Motorsports entry with the first event just a month away at the famed Daytona International Speedway.

“I am over the moon with excitement to commit to running the 2022 Mazda MX-5 Cup season with Hixon Motor Sports,” expressed Bryce Cornet. “Shea was one of the first to reach out to me with words of encouragement after the Mazda Shootout in 2020 did not go the way I had hoped, and I never forgot that. I was able to spend time with the Hixon Motor Sports Team during the MX-5 Cup 2021 Finale at Road Atlanta, and the team truly understands what it takes to not only be successful on track but off track as well through their ability to support partners in achieving brand objectives.”

“Bryce is a great talent, and in one of our HMS cars, Cornet will be a threat for race wins and podium results,” explained Team Owner, Bryan Hixon. “He will be a very important piece to our growing puzzle and an asset to ensure that our complete driver lineup is at the pointy end of the grid.”

Team Manager, Shea Holbrook, added, “Personally, I am excited to have Bryce as part of our efforts in 2022. I noticed his skills a few years ago, and we are finally able to align with Bryce to make a run towards the top of the results sheets this coming year.”

Cornet added, “Additionally, I am honored to be running the season with support from Mazda Motorsports as a 2021 Shootout Scholarship Recipient. Mazda has a rich history of being at the forefront of sportscar racing and truly supports grassroots drivers unlike any other manufacturer. I am thankful to have the opportunity to further support the Mazda brand. The support and belief that Mazda has shown me has given me the spark I’ve needed to continue to make this dream a reality.”

Earning a $75,000 Mazda MX-5 Cup Scholarship for the 2022 season, Bryce achieved his goal after making the switch to sportscar racing. With an amazing opportunity to run in MX-5 Cup with HMS, Cornet is living his dream of climbing the motorsports ladder.

Kicking off his motorsports career at the age of six when he began racing karts for a local karting team in Norman, Oklahoma, Cornet progressed through the national ranks winning multiple championships, setting track records, and receiving numerous accolades for driving skill and consistency. In 2010, a few months after attending his first open-wheel racing school in Toronto, Canada, and setting a track record his first time in a race car, Bryce was diagnosed with two heart abnormalities: Wolff-Parkinson-White Syndrome (WPW) and Supraventricular Tachycardia. These abnormalities temporarily hindered his ability to progress in motorsports, physically due to undergoing treatment and financially due to the cost of medical bills. Now being cured, Bryce is continuing the pursuit of his goals in motorsports.

An award-winning documentary was produced that shares his journey of overcoming these heart abnormalities while maintaining the drive to progress in motorsports.

The first two races out of 14 in the 2022 Idemitsu Mazda MX-5 Cup Presented by BFGoodrich Tires will take place at Daytona International Speedway during the renowned Rolex 24 Hours of Daytona weekend, January 27-30. If you cannot attend in person, you’ll be able to watch Bryce and his HMS teammates racing live with commentary all-season long on www.IMSA.TV.