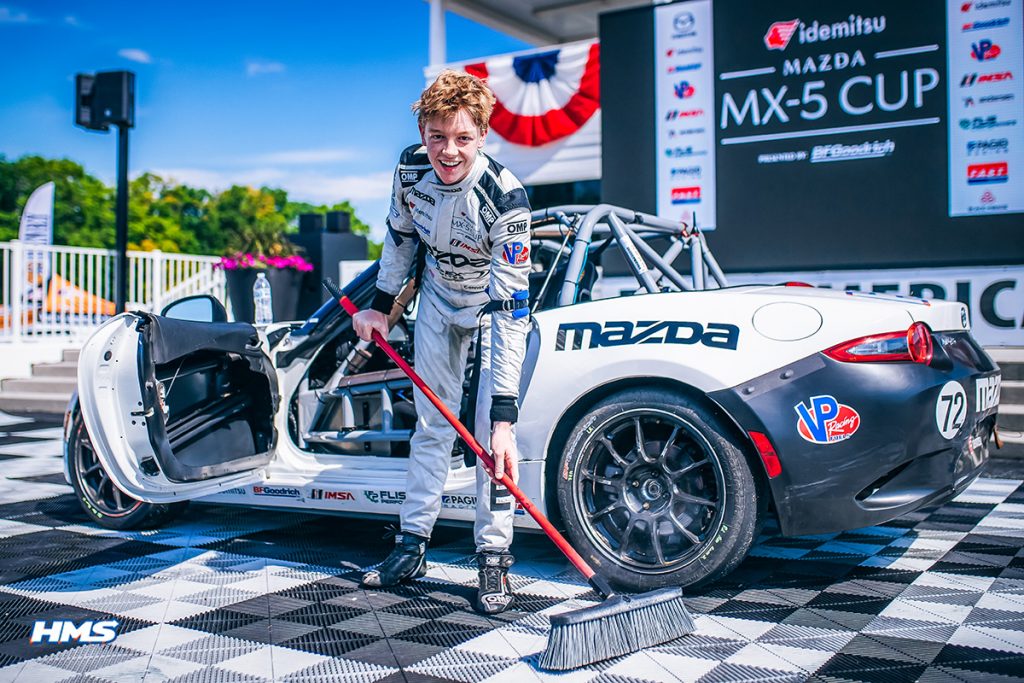 It was a winning weekend for Hixon Motor Sports (HMS) during the second half of back-to-back race weekends. Taking on the Idemitsu Mazda MX-5 Cup presented by BFGoodrich Tires (MX-5 Cup), rookie Connor Zilisch stole the show earning a pair of pole positions and his first two victories in the series to dominate the 4.014-mile, 14-turn Road America in Elkhart Lake, Wisconsin. With those results, Zilisch jumps to third in the overall series point standings and first amongst the rookie competitors. Additionally, Hixon Motor Sports earned the VP Clean Image Award at Road America. 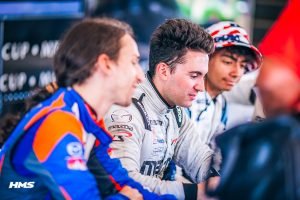 “I am extremely grateful for the drivers that are on our roster this season, and I think 2023 will also be a great season for HMS,” announced Team Owner, Bryan Hixon. “Connor Zilisch’s extra points and points for winning twice moved Hixon Motor Sports from the third team entry to the number one team entry (out of nine). That’s a major milestone for this young team, and we are so grateful to have so much talent on this team, and that includes the coach and the crew that work tirelessly, together. Zilisch also broke another team milestone by winning back-to-back races, and we can’t thank him enough for his innate talent and racecraft. Now we know why Mazda Motorsports referred to Connor as a racing prodigy before the season started, and Mazda was absolutely spot-on accurate with that nickname.”

After a pair of practice sessions that would see the Hixon Motor Sports drivers scattered throughout the field, Friday would be the home of the ever-important qualifying session. Scoring the pole position at Watkins Glen International Raceway a week ago, Connor Zilisch was back at the top of the charts in the timed session to earn his second and third pole positions of the season in back-to-back performances. With Zilisch set to lead the field to the green flag, three HMS drivers started their weekend campaign from inside the top-ten with Selin Rollan in sixth and Bruno Carneiro in eighth. Looking to move forward once the wheel-to-wheel action ensued, Bryce Cornet started on the outside of row ten ahead of Ethan Tyler and Dante Tornello in 27th and 29th, respectively.

“For a few laps in race one, HMS was leading in first, second, and third positions; it was one of those big moments along our pit boxes and crew to say the least,” mentioned HMS Brand Ambassador, Scott Michael.

Race one would be a winning one for the HMS squad as Connor Zilisch converted his pole position into his first MX-5 Cup victory. Working to stay ahead of the field, the rookie drove like a veteran as he was able to take his first career series win. Selin Rollan enjoyed a good point scoring day with a fourth-place result, just ahead of Bruno Carneiro in fifth as HMS put three in the top-five. Ethan Tyler had a ten-position gain from his qualifying effort to cross the line in P17 as Dante Tornello followed suit gaining five positions. Unfortunately, Bryce Cornet was a victim of contact and was forced to retire for the first wheel-to-wheel race of the weekend. 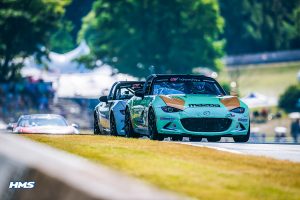 Zilisch would continue race two right where he left off in race one turning his third pole position into his second career MX-5 Cup win, and he swept Victory Circle with his second win of the weekend. As only a 15-year-old and a rookie, Zilisch drove like a motorsports legend in his run to the checkered flag to make a second trip to the top step of the podium.

“What a great weekend for Connor!” expressed Bryan Hixon. “The kid is the real deal, and we are happy to be racing with him and not against him. Proud to have him and his down-to-earth and enjoyable family under the HMS awning and looking forward to achieving all our goals for the rest of the 2022 season.”

While Zilisch dominated the wheel-to-wheel racing to score the race two win, the remainder of the HMS drivers ran into some difficulties and fell down the running order. Dante Tornello earned his career best finish in 15th as Ethan Tyler did the same in 18th. Selin Rollan, Bruno Carneiro, and Bryce Cornet were victims of unfortunate circumstances as Rollan and Carneiro finished 20th and 21st, just ahead of Bryce Cornet in 24th.

HMS Team Manager, Shea Holbrook Chorley added, “While we had some great results, we also struggled in other areas, but we will take this summer break to regroup and be focused and ready for VIR in six weeks’ time.”

The next event for the Idemitsu Mazda MX-5 Cup presented by BFGoodrich Tires series will take place over the August 26-28 weekend at the VIRginia International Raceway.