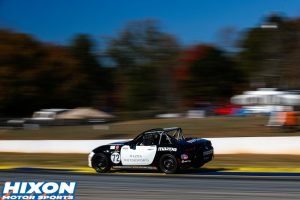 In what is set to be a busy season for Hixon Motor Sports (HMS), fifteen-year-old karting sensation Connor Zilisch will contest the complete Idemitsu Mazda MX-5 Cup Presented by BFGoodrich Tires 2022 season (MX-5 Cup) with a race winning program at HMS. As part of a dual program effort, Zilisch will also compete in the Trans-Am TA2 class as he builds his motorsports racing resume.

“We are delighted to have Connor as part of the Hixon Motor Sports family and are confident that he will be a threat for race wins, podiums results and Rookie of the Year honors this coming season,” explained HMS Team Manager, Shea Holbrook. “His karting resume speaks for itself, and Connor has shown great speed in one of our cars in winter testing. We can’t wait for the first wheel-to-wheel racing of the new season.”

“I’m really excited to be racing in the Mazda MX-5 Cup series next year with Hixon Motor Sports,” expressed Zilisch, who will drive the Mazda Motorsports, Late Apex Storage (www.LateApexStorage.com), Hixon Motor Sports #72 entry. “I felt really comfortable running with the team at Petit Le Mans last month and feel like they will give me all the tools I need to not only continue to develop as a driver, but to also compete for podiums and wins as well. I can’t thank Mazda Motorsports enough for making this possible with their support through the MX-5 Cup Shootout Scholarship program. It should be a great year!”

“Connor has been a winner and champion in everything that he has competed in throughout his rise through karting,” added HMS Team Owner, Bryan Hixon. “We are very excited to have him in our program racing for us and not against us. His natural skills and abilities are apparent every time he gets behind the wheel, and I think Connor Zilisch is a name that everyone will hear a lot of next season.”

Before turning to cars this year, Zilisch had won multiple national karting championships in North America and proven successful results overseas in the ultra-competitive European ranks. In Italy, Zilisch scored the 2017 ROK Cup Superfinal Championship in the Mini ROK category and in 2020 the FIA Academy Trophy title.

In his short car racing career, Zilisch has made the transition to cars appear seamless. He finished third in the Spec Miata race during the SCCA National Championships October 1 at Indianapolis Motor Speedway and set three separate lap records – two in Spec Miata at Michelin Raceway Road Atlanta in Braselton, Georgia, and Carolina Motorsports Park in Kershaw County, South Carolina, respectively, and one in MX-5 Cup at Road Atlanta.

While contesting for the $80,000 Rookie of the Year Award as well as the $250,000 Championship prize in Idemitsu Mazda MX-5 Cup Presented by BFGoodrich Tires, Zilisch will also compete in the Trans-Am TA2 division for Silver Hare Racing.

Holbrook continued, “Connor is the first of our driver announcements for what will be a very strong and championship-contending lineup in 2022.”

The first two races out of 14 in the 2022 Idemitsu Mazda MX-5 Cup Presented by BFGoodrich Tires will take place at the famed Daytona International Speedway during the renowned Rolex 24 Hours of Daytona weekend, January 27-30. If you cannot attend in person, you’ll be able to watch Connor and his HMS teammates racing live with commentary all-season long on www.IMSA.TV.

Late Apex Storage Condos is situated on just over 8 acres located in Deerfield Business Park just north of Exit 36 off I77 in Mooresville, North Carolina. Entry to the facility is less than 5 minutes from Exit 36 and will be literally seconds away from the planned “Exit 37” interchange at Cornelius Road and I77 when it ultimately gets built.

Located in the southern tip of Iredell County, the facility will benefit from low Iredell County property tax rates while still enjoying close proximity to Charlotte and the greater Lake Norman area. Late Apex Storage is only ~4 miles from the Stumpy Creek boat ramp on Lake Norman.

Known as Race City USA, Mooresville is the home of many NASCAR teams and other racing-oriented businesses including a few that are close neighbors. The name, Late Apex, describes a racing line that enables drivers to go “slow in and fast out of corners”, often the fastest way to get around a racetrack.