Bruno Smielevski Charges Up for 2023 with Hixon Motor Sports 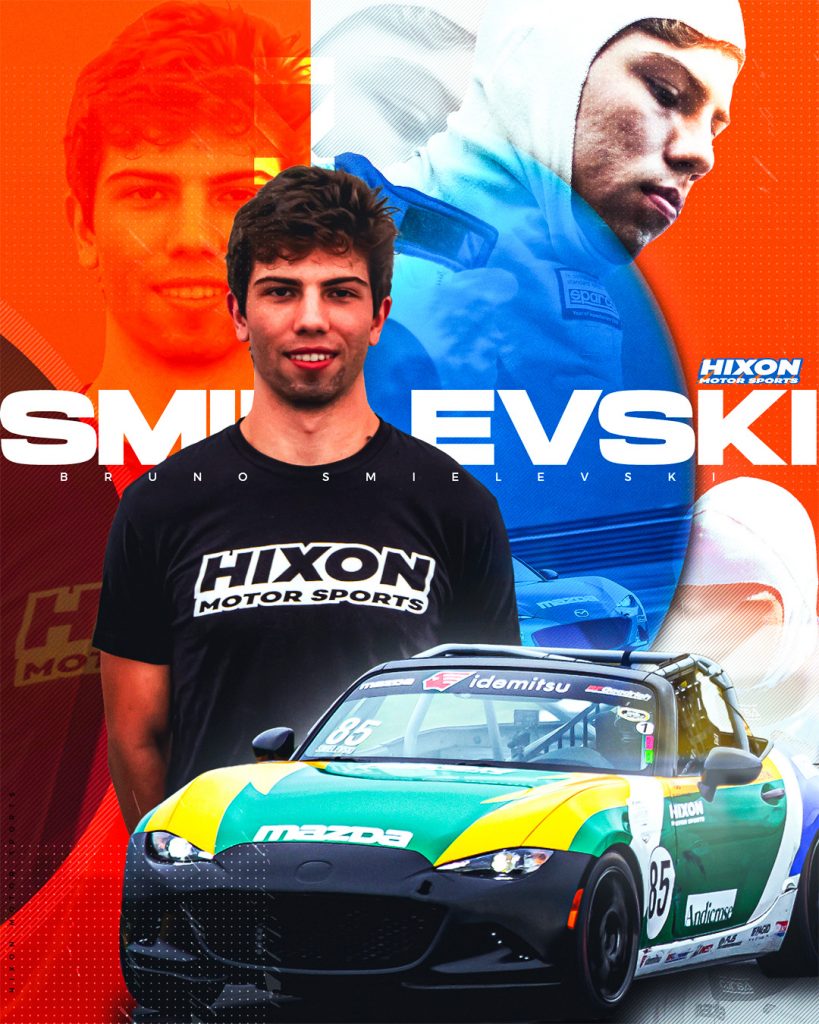 Adding another driver to their 2023 Idemitsu Mazda MX-5 Cup presented by BFGoodrich Tires (MX-5 Cup) program, Hixon Motor Sports (HMS) is welcoming back Bruno Smielevski for a full-season campaign. Joining HMS, the Brazilian racer, who comes with a long list of accomplishments, is ready to attack a new season of competition beginning in just a few short weeks at the Daytona International Speedway.

“We welcome Bruno back to the HMS family and can’t wait to get a new season started,” explained Bryan Hixon, Owner of Hixon Motor Sports. “Bruno’s resume is quite impressive and after getting a taste of MX-5 Cup competition at VIRginia International Raceway in 2022, we feel that he can be a big threat in helping our program continue our upward trajectory. When you see your new driver pull off the Hard Charger Award in his first weekend with the team, let’s just say it’s more than exciting to have Bruno for an entire season to prove his worth.”

“I am looking forward to the opportunity to compete with Hixon Motor Sports in a full-season effort,” expressed Bruno Smielevski. “HMS has a track record for success and only hope that I can aid in those challenges.”

Competing in the karting ranks in Brazil, Smielevski moved through the motorsports ladder into car racing several years ago. As a multi-time karting champion, Bruno took his talents to the United States where he competed in the largest national programs. Back in Brazil in 2020, Bruno has been seen at the front of the grid in the Endurance Brazil program, where he has been a threat for race wins and podium results for the past several seasons. More recently, Bruno tested with the Carlin Motorsport program in a British Formula 4 car in the United Kingdom. Racing everything from competitive karting to 260 horsepower cars, Bruno brings a load of experience and knowledge with him to Hixon Motor Sports despite being very young in age.

Team Manager Shea Holbrook added, “Bruno came to us last year and while he has a ton of experience, he did not know many of the tracks in the USA. Understanding the level of competition in the MX-5 Cup program along with his sponge-like attitude for absorbing information and data, we feel that he will become a contender in 2023!”

Hixon added, “Bruno is determined to succeed, and we can help him achieve his goals. If there were a Most Improved Driver award, then Bruno would definitely be on the radar for that achievement in 2023.”