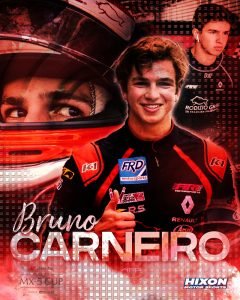 With the opening round of the 2022 Idemitsu Mazda MX-5 Presented by BFGoodrich on the horizon, Hixon Motor Sports (HMS) continues to add stars to their driver lineup. With five drivers set to take to the track at the famed Daytona International Speedway in late January, HMS is pleased to confirm Bruno Carneiro as their newest challenger.

“I have raced around the world in both open wheel and sportscar racing and am excited to hit the high banks of the Daytona International Speedway,” explained the Rodizio Grill sponsored Bruno Carneiro. “I have worked hard to raise all my own funds to go racing and can’t thank Bryan, Shea and the entire Hixon Motor Sports crew enough for the amazing opportunity.”

“We are excited to have Bruno in the HMS squad for Daytona, and hopefully the full season,” explained Bryan Hixon. “His results speak for themselves and his drive to compete is second to none. The effort he puts in off the track is buoyed by his on-track performance.”

A driver since the age of four, Bruno began karting with the help of a Brazilian Steakhouse, Rodizio Grill. While his father worked for the company, Bruno would accompany him to some meetings and to keep from being bored, would use the silverware, salt, and pepper to build a makeshift racetrack. Since that point in time, Ivan, Rodizio’s Founder, saw Bruno’s passion and has been helping him since those early days.

With the help of Rodizio Grill, Bruno raced high level karts until the age of fifteen earning several State Championships and claimed top-ten results in both the National Italian Trofeo Ayrton Senna Championship and in the Brazilian National Karting Championship. In 2015 Bruno graduated to Formula Cars winning the regional NASA Utah Fórmula Class and in 2016, was invited to compete in the FIA Chinese F4 Championship where he claimed a total of eight victories in the year, and all but one podium finish. In the same season, Bruno also ran the Formula Car Challenge series in the Pro Formula Mazda earning the series title.

In 2017 and 2018, funding became difficult and while competing in the highly competitive Japanese F3 series, results were sporadic as events were missed and testing was limited. In late 2018, Bruno got the chance to compete in the NASA WERC six-hour enduro and won overall driving a Lamborghini Super Trofeo. Continuing his success, Bruno was the Asian Formula Renault Vice Champion in 2019 along with starting a Driver Coaching business which he still does today and has afforded him the opportunity to get back behind the wheel of several racecars.

Competing in one Mazda MX-5 Cup event in 2021 with a lower budget program and with a tight budget, Bruno was able to show his prowess and set a new race lap record at the WeatherTech Raceway Laguna Seca and had made my way from 18th to eighth, catching the top-five pack before a battery issue forced him to retire.

Bruno added, “I feel I am up for the challenge, and I know the Hixon Motor Sports equipment is capable of winning. I have my goals set high and look forward in working with them to achieve them all.”

The first two races out of fourteen in the 2022 Idemitsu Mazda MX-5 Cup Presented by BFGoodrich Tires will take place at Daytona International Speedway during the renowned Rolex 24 Hours of Daytona weekend, January 27-30. If you cannot attend in person, you’ll be able to watch Bruno and his HMS teammates racing live with commentary all-season long on www.IMSA.TV.