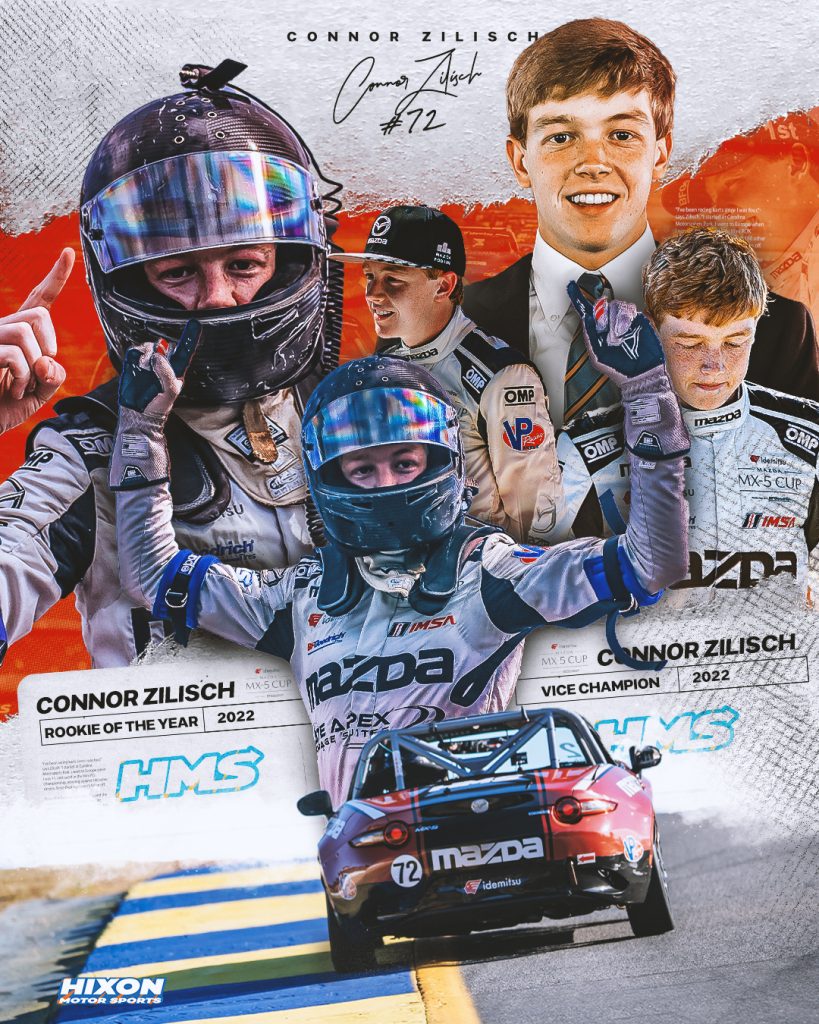 After finishing second in the 2022 Idemitsu Mazda MX-5 Cup presented by BFGoodrich Tires Championship (MX-5 Cup) on route to earning 2022 Rookie of the Year honors, multi-time race winner Connor Zilisch has confirmed a partial 2023 campaign with Hixon Motor Sports (HMS). Running a dual program that will once again see him compete in MX-5 Cup and the Trans-Am Series in the TA2 class, Zilisch will be a threat for race wins beginning in Daytona January 26-27, 2023.

“I’m looking forward to the 2023 season and teaming back up with Hixon Motor Sports for select races in the Mazda MX-5 Cup Series,” explained Zilisch. “I really wish I could join HMS for a full season effort, but conflicts with the Trans Am TA2 schedule are holding me back. I had so much fun racing in the Mazda MX-5 Cup Series last year, I just had to come back to it! I’m excited to work with all the great people at HMS again, with some new faces as teammates as well.”

One of the most dominant drivers in 2022, Zilisch was part of a potent combination that brought multiple wins and podiums to the Hixon Motor Sports program. Earning the title until a post-race penalty on a fellow competitor elevated his rival forward one position to gain an additional ten points and steal the championship away by the smallest margin of victory after the checkered flag, Zilisch proved that he has a long career coming in the world of motorsports.

“Connor is a great driver, competitor, a bit of a witty comedian, an excellent teammate, and we are glowing to have him back in our HMS family,” explained Hixon Motor Sports Owner, Bryan Hixon. “Even though he will not be fighting for the season-long points battle, he is a valuable asset to our program, mature beyond his years, and we look forward to more success with him this coming season as he battles for the new race-by-race prizes implemented by Mazda in 2023. Mazda nicknamed Connor “The Prodigy”, and Zilisch has proven worthy of that callsign by the team and the MX-5 Cup paddock.”

Team Manager, Shea Holbrook, added, “Excited to have Connor back in 2023. Along with his on-track speed and results, he brings a personality to the paddock that we all enjoy. Connor is fun loving all the time but a serious competitor when needed, and I think this is a reason why he has been as successful as he has been at such a young age.

Zilisch added, “We will be striving for success, and hopefully I can assist in bringing another team championship to Hixon in 2023, and help a teammate earn the driver’s championship. A big thanks to Bryan Hixon, Mazda, and Late Apex Storage Condos for everything they are doing for me to get me back in the seat again for 2023. I can’t wait to work with two incredible coaches, Andrew Carbonell and John Dean, and to get started at Daytona International Speedway!”