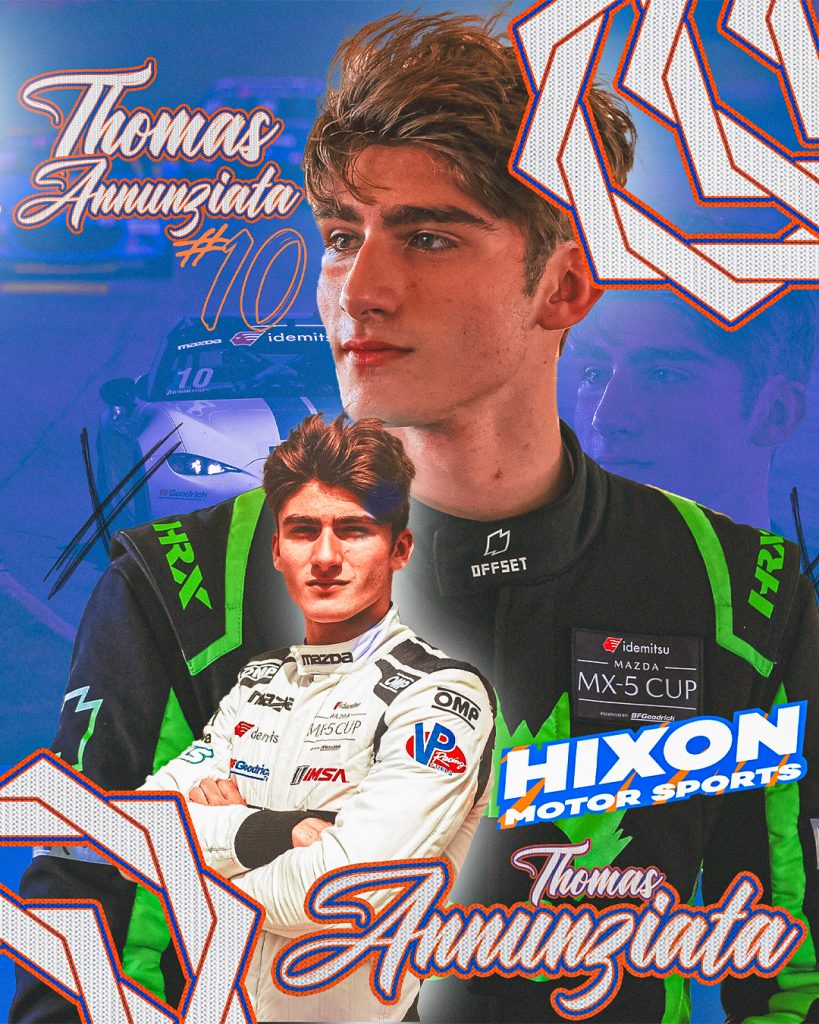 With one event during the 2022 Idemitsu Mazda MX-5 Cup presented by BFGoodrich Tires (MX-5 Cup) season with Hixon Motor Sports (HMS), young-gun Thomas Annunziata is now set for a full season. Set to make a run at the 2023 series title and Rookie of the Year Honors, Annunziata has confirmed his intentions for a new season of competition.

“I am motivated, anxious, excited, and ready to get going,” exclaimed Thomas Annunziata. “I feel that I am with the best team that houses a wealth of knowledge and the best preparation program in the Mazda MX-5 Cup paddock. I have some experience and a lot to learn, but I am confident that I can run at the front of the field and continue the winning reputation that HMS has become known for.”

“Thomas is another young driver moving up from the karting ranks in recent years,” expressed Team Owner, Bryan Hixon. “He brings drive and determination which usually does well in this series. Thomas will have a great group of teammates around him this coming season, and I am confident that they will all push one another to have success.”

“We’re super excited to see what’s in store for Thomas in 2023!”  said Beverage USA Co-Founder Rocco LaVista. “He is an exceptionally focused and driven young man that has been nothing short of amazing in representing NERD Focus. We’re really proud to be behind him.”

LaVista continued, “NERD Focus has become extremely popular with professional drivers. The ingredients in our product provide an energy boost and have demonstrated the ability to improve mental acuity, cognition, and overall focus – essential benefits for participants in the sport.”

Coming from a colorful karting career that featured multiple race wins and championship performances, Annunziata climbed to the top step of the podium in several of North America’s largest karting programs. Annunziata was also a Mazda Motorsports Spec MX-5 Scholarship finalist in 2021. In 2022 he competed in Mazda’s Spec MX-5 National Series and had four wins and six podium results earning the top honors to become the Spec MX-5 National Series Champion as well as the Spec MX-5 Challenge Series Champion.

“On behalf of Ai Media Group, I want to express our sincere admiration for Thomas’s talent and dedication as a young race car driver. His skills on the track are truly impressive, and we are proud to be a sponsor of such a talented and driven individual. Annunziata’s hard work and dedication to his craft is evident in numerous impressive results, and we have no doubt of the bright future ahead for him in the world of motorsports. We are thrilled to be a part of his journey and look forward to seeing all of his future achievements and milestones in motorsports,” said Sergio Alvarez, CEO and Founder of Ai Media Group.

In 2022 Annunziata also made his debut in the Pro category of Mazda racing with their Idemitsu Mazda MX-5 Cup Series this time racing with Hixon Motor Sports at VIRginia International Raceway. Thomas was at the front for most of the race earning an 11th-place result in his first wheel-to-wheel action as he improved in race two to earn a top-ten finish and cross the line in the ninth position.

When not racing a Mazda, Thomas has also run in select TA2 events, claiming a third-place podium result at the famed Circuit of the Americas in only his second-ever TA2 start amongst the largest field in history for the class.

Rounding out his 2022 season and sticking to his karting roots by racing in open wheel, Thomas earned four wins and 11 podiums going on to be the Lucas Oil Scholarship program’s Vice Champion.

“Thomas is a smart racer and has proven his success in every form of motorsports,” added HMS Team Manager, Shea Holbrook. “We are expecting no different from him in 2023.

Annunziata continued, “A new season starts in just two short weeks, and I have dreamt about driving into victory lane in Daytona Beach…That is the goal!”